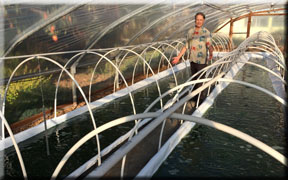 Shot of Spirulina being harvested directly from the grow-bed 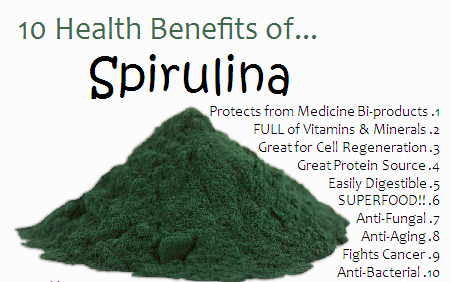 Spirulina is the immortal descendent of the first photosynthetic life form. Beginning 3.5 billion years ago, blue-green algae created our oxygen atmosphere so other life could evolve. Since then, algae have helped regulate our planet’s biosphere. Algae are two-thirds of the Earth’s biomass. Thousands of algal species covering the Earth are being identified and developed for foods, feeds, pharmaceuticals, biochemicals, fertilizers and biofuels.

In the beginning were blue-green algae

When life began on Earth, the carbon dioxide level in our atmosphere was probably 100 times greater than it is today. Life began in a greenhouse atmosphere, and microalgae played the central role in transforming this inhospitable planet into the beauty and richness that makes up life today. How this occurred is particularly relevant in view of our concern with global warming.

Scientists believe the Earth formed about 4.5 billion years ago, and the first life forms appeared 3.6 billion years ago. There is some controversy about how life was actually created on this planet. Because the young sun was 25% cooler at the beginning of life, the greenhouse effect kept a cooler planet warmer. Earth’s nitrogen atmosphere, without any oxygen, was rich in greenhouse gases (like carbon dioxide and methane) absorbing and trapping radiant heat, with the infrared radiation rising from the surface. The oceans were filled with iron, sulfur and other compounds in solution because there was no free oxygen. These substances reacted with and removed oxygen, so the Earth had a great capacity to prevent the appearance of free oxygen.

The first living bacteria, the procaryotes, consumed chemical nutrients as food, but some adapted the energy of the sun to make their own food. The first photosynthesizing procaryotes, called cyanobacteria or blue-green algae, used light energy to break apart the abundant carbon dioxide and water molecules into carbon food compounds, releasing free oxygen. Fossils dating back 3.6 billion years, show filaments of these single cells stacked end on end. The shape unmistakably resembles spirulina.

Cyanobacteria colonized the oceans and formed a thin film on land masses. These blue-green algae carried their genetic information in DNA strands in the cell membrane distributing information by exchanging plasmids with another. In this way, the organism became essentially immortal, and one could say linked by its own communication network. Cyanobacteria continued to release ogygen and over a billion years passed.

About 2.3 billion years ago, a new period began when oxygen may have reached a 1% level. Cells with nuclei appeared, a more powerful and complicated life form supported by higher oxygen concentration. These eukaryotes, such as microscopic green algae, may have formed from communities of individual bacteria living within an outer membrane of one of them. The nucleus contained organelles such as chloroplasts, the green bodies that photosynthesize. Because each organelle carried different genetic codes, the loss of information of one of them could mean the death of the cell. To overcome this possibility of death, sex evolved as a way to transfer information between cells.

The green algae chlorella in the microscope, showing round cell and nucleus.

About 600 million years ago, Earth entered the present phase with the evolution of large plants and animals. The power requirements of larger organisms like trees and dinosaurs needed a higher oxygen concentration, which increased and remained steady at 21%. For hundreds of millions of years, the Earth’s biosystem has kept the oxygen level carefully balanced between 15%, where higher life forms cannot survive, and 25%, where forests would spontaneously combust in a global fire.

The procaryotes, cyanobacteria or blue-green algae, still cover the land and water surfaces, part of the living mechanism that help regulate the planet’s biosphere. Realizing that algae took billions of years to build and maintain the atmosphere, it is remarkable that humanity has raised the carbon dioxide concentration over 25% in merely one hundred years.

How important is the contribution this original life form? Brian Swimme, in The Universe is a Green Dragon wrote: “I think we should take the procaryote as the mascot of the emerging era of the Earth. What better organism to symbolize the vast mystery of the Earth’s embryogenesis … Let’s just hope we can emulate some of the achievements of the procaryotes … To begin with, it would be wonderful if we could contribute something as essential to Earth’s life as oxygen.”

There may be more than 25,000 species of algae, living everywhere. They range in size from a single cell to giant kelp over 150 feet long. Most algae live off sunlight through photosynthesis, but some live off organic matter like bacteria.

Larger algae, like seaweeds, are macroalgae. They already have an important economic role. About 70 species are used for food, food additives, animal feed, fertilizers and biochemicals.

Microalgae can only be seen under a microscope. Some serve a vital role for breaking down sewage, improving soil structure and fertility and generating methane and fuels for energy. Others are grown for animal and aquaculture feeds, human foods, biochemicals and pharmaceuticals.

Ocean microalgae are phytoplankton, and are the base of the food chain supporting all higher life. The rich upwelling of nutrients caused by major currents meeting the continental shelf and nutrients from river basins sustain phytoplankton growth.

Microalgae are everywhere – in water, in soils, on rocks, on plants. Blue-green algae are the most primitive, and contain no nucleus or chloroplast. Their cell walls evolved before cellulose, and are composed of soft mucopolysaccharides. Blue-green algae do not sexually reproduce; they simply divide.

Chlorella has been cultivated since the 1970s. Thousands of tons have been sold each year for the past 40 years as a food supplement. Commercial farms in Taiwan, Southern Japan and Indonesia produce much of the world supply.
Dunaliella likes water even saltier than the ocean. This microalgae is too salty to be eaten as a whole food, but its beta carotene is extracted as an oil or powder and sold as a natural food supplement and antioxidant and a color for aquaculture feeds.
Haematococcus is grown in both outdoor ponds and closed systems for Astaxanthin, a carotenoid pigment, extracted as a fish feed supplement to color salmon flesh and as an anti-oxidant human food supplement.
Schizochytrium is a marine microalgae grown in vats by fermentation, and developed as a source for docosahexaenoic acid (DHA, C22:6 (omega-3) and used as a supplement in a wide variety of food and feed products.
Aphanizomenon flos-aquae is a nitrogen fixing blue-green algae. Harvested from a lake in Oregon, it is sold a food supplement.

Many people have asked about differences between two kinds of blue-green algae spirulina and aphanizomenon flos-aquae.

Blue-green algae is also called cyanobacteria. Some can fix atmospheric nitrogen into organic forms. Organic nitrogen is essential for building proteins and amino acid complexes in plants and animals. Although nitrogen gas comprises 78% of the atmosphere, it is not usable by most plants and animals. For more productive crops, nitrogen must be added to soils. Organic nitrogen can only come from adding chemical fertilizers, from existing microbial mineralization of organic matter, by nitrogen-fixing bacteria in legume roots, or by nitrogen-fixing blue-green algae.

Because of this ability to fix nitrogen, blue-green algae is often the first lifeform to colonize a desolate land area – in deserts, in volcanic rocks, on coral reefs, and even in polar regions, working with lichen to fix nitrogen to the rocks to begin life in the tundra. Nitrogen-fixing blue-green algae are being developed as natural biofertilizers, but they are not always safe to eat. Many kinds of microcystis, anabaena and aphanizomenon are toxic just like some mushrooms and land plants.

Spirulina is not a nitrogen fixing blue-green algae. It grows in extreme alkaline and high PH environments. Spirulina has a long history of safe human consumption, known to be safe and nutritious. Most kinds of blue-green algae has not been subject to spirulina’s long safety testing. Hundreds of published scientific studies over the past thirty years have documented no toxicity.

In natural lakes, the limited supply of nutrients usually regulates growth cycles. New nutrients come from an upwelling from inside the earth, when rains wash soils into the lakes, or from pollution. The algae grows rapidly, reaches a maximum density, and then dies off when nutrients are exhausted. A new seasonal cycle begins when decomposed algae release their nutrients or when more nutrients flow into the lake.

Some of the largest natural spirulina lakes are in Central Africa around Lake Chad, and in East Africa along the Great Rift Valley. Under normal water conditions, spirulina may be one of many algal species. But the more alkaline water becomes, the more inhospitable to other lifeforms, allowing spirulina to flourish as a single species.

Lakes Bodou and Rombou in Chad have a stable monocultures dating back centuries. It is predominant in Kenya’s lakes Nakuru and Elementeita and Ethiopia’s lakes Aranguadi and Kilotes. The lesser flamingo evolved a filter in its beak to eat spirulina.

Spirulina thrives in alkaline lakes where it is difficult or impossible for other microorganisms to survive. Because the bacteria level in alkaline water is quite low, the bacteria count in spirulina, harvested and dried without further processing, is low. Algae pioneers have dreamed for decades of harvesting from these lakes to feed millions of nearby hungry people and to support a healthy local economy.

Our rediscovery and interest in algae, the original life form, represents a return to the origins of life to understand and heal our planet. 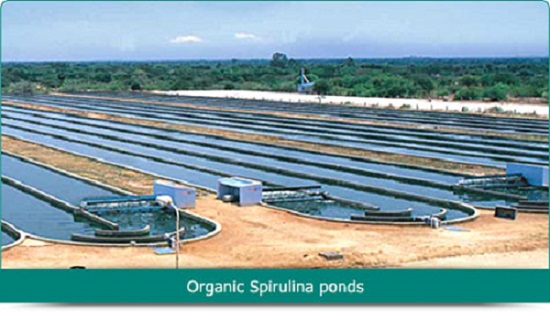