Curriculum for grades K-12 is established by collaboration between the California State Board of Education and the University of California. At this time, schools are developing a response to new, national, Common Core standards that have evolved from years of planning among senior educators tasked with setting a course for learning in a post-technological age. Every school is expected to produce graduates with a rich understanding of science, technology, engineering, math, and the English language arts and sciences.

The goal is to develop minds with creative, global perspectives, to teach collaborative skills, to instill in youth the ability to think critically and communicate clearly. This prepares graduates to compete in emerging global economies, to solve complex problems by responding effectively to the 21st century challenges that our world must face and overcome.

The RootStock Foundation provides teachers and students with live-science, hands-on labs designed to give a multi-dimensional view through nature that is interrelated with coursework and subject matter across a wide range of disciplines. By engaging students, as well as teachers, in project-based learning that filters through all five senses, a much deeper understanding of life's working parts is developed. Rhythmic flows of energy are tapped for their unforgettable wonder, as students nurture seeds, cultivate fresh foods, learn the goodness of culinary traditions that inspire appreciation respect, gratitude, and love.

Science, math, history, language and every kind of expression knowable by humans originates in nature's core relationships. Not surprisingly, the path that best prepares us for a productive life of learning crosses through a garden that let's us see exactly how our world functions.

Many studies have been conducted and published that track the impact on students when education is enhanced by nature studies and project-oriented, immersive and hands-on projects are introduced to school curriculum.

Here are a few of the studies: 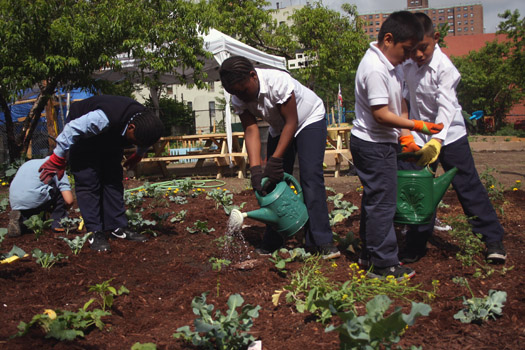 Growing Minds: The Effect of a School Gardening Program on the Science Achievement of Elementary Students 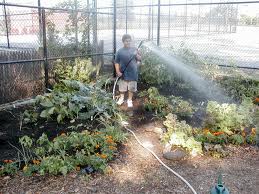 Growing Minds: The Effects of a One-year School Garden Program on Six Constructs of Life Skills of Elementary School Children 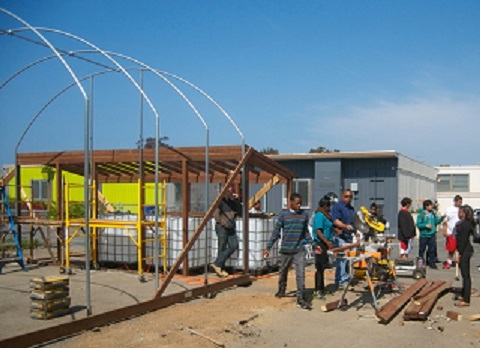 Beyond science and math, English language arts and history are also deeply rooted in traditions that emerge in nature.

“In Defense of Our Overgrown Garden”

from Pity the Bathtub Its Forced Embrace of the Human Form.

Last night the apple trees shook and gave each lettuce a heart
Six hard red apples broke through the greenhouse glass and
Landed in the middle of those ever-so-slightly green leaves
That seem no mix of seeds and soil but of pastels and light and
Chalk x’s mark our oaks that are supposed to be cut down
I’ve seen the neighbors frown when they look over the fence
And see our espalier pear trees bowing out of shape I did like that
They looked like candelabras against the wall but what’s the sense
In swooning over pruning I said as much to Mrs. Jones and I swear
She threw her cane at me and walked off down the street without
It has always puzzled me that people coo over bonsai trees when
You can squint your eyes and shrink anything without much of
A struggle ensued with some starlings and the strawberry nets
So after untangling the two I took the nets off and watched birds
With red beaks fly by all morning at the window I reread your letter
About how the castles you flew over made crenellated shadows on
The water in the rainbarrel has overflowed and made a small swamp
I think the potatoes might turn out slightly damp don’t worry
If there is no fog on the day you come home I will build a bonfire
So the smoke will make the cedars look the way you like them
To close I’m sorry there won’t be any salad and I love you

© 2000 by Matthea Harvey. Reprinted by permission of Alice James Books.

"...September 14, 1786, (the) two ships (that) appeared...off the coast of Monterey...L'Astrolabe and La Bourssole, were French. Although San Diego had been founded... in 1769, and Monterey a year later, these were the first foreign vessels to visit Spain's California colonies... the ships' libraries were endowed with a generous selection of reference books. There were included the published accounts of previous voyages, natural histories, and books on astronomy, chemistry, and meteorology. There were floras, a book on the theory of winds, another on the theory of tides, and others on zoology, fishing... All in all, over a hundred titles were assembled and listed in the ship's catalog... The gardener... was expected not only to collect plants, but also to introduce useful plants to others and, to enable this happy ending, was supplied with seeds, roots, and cuttings. His inventory included six bushels each of apple and pear kernels, plus many bushels more of seeds, stones, or pits of gooseberry, currant, grape, peach, apricot, plum, cherry, almond, melons of various kinds, artichoke, pepper, celery, chervil, several grains, and still other crops. A root cellar was created in the darkest part of the hold for the bushels of onion, turnip, carrot, radish, garlic, potato, parsnip, and beet roots. As the day of departure drew closer, longshoremen moved onto the decks of La Boussole a small forest of some fifty living trees and vines--Montmorency cherry trees, black heart cherry trees, white heart cherry trees, olive trees, quince trees, grape vines, fig trees, chestnut trees...In addition, the gardener brought with him a huge assortment of trowels, knives, shovels, watering pots, tin boxes, mattocks, saws, and other pieces of equipment that he would need to tend, water, transplant, and collect more plants. For the crew there was the most modern of foods and bedding, plus a considerable stock of spruce, malt, and other scurvy preventatives..."

"Not only did the [native] people of the Monterey Bay live together, but they seem to have prospered. Although there may have been some shortages of a particularly desirable food, there is little evidence in the mythology, the archaeological record, the reports of early visitors...that hunger was a problem before the coming of the Spaniards. On the contrary, the most common description of the Indians during the pre-conquest years shows them bringing gifts of deer, antelope, elk, and rabbit meat, plus fish, seed and nut cakes, and other foodstuffs to the Spaniards from their obviously abundant stores. Virtually all early visitors were extravagant in their praise of the rich wildlife and resources of the Monterey Bay area. Each fall and winter steelhead trout and silver (coho) salmon splashed up the larger streams...Immense schools of smelt dashed themselves onto the beaches...Clams, mussels, abalone, and other shellfish were abundant...Great flocks of migrating geese and ducks...settled each fall into the marshlands...Deer were plentiful, as were elk, and herds of pronghorn antelope...Seals and...sea otters...could often be caught. There were also nuts--especially acorns and pine nuts...plus wild roots and bulbs, grasses, and flowers, berries, and greens. In addition, the tastes of the Indians ran to foods generally avoided by Europeans--grasshoppers, groundsquirrels, mice, and small birds..."

"An appreciation of the complexities of Indian culture is difficult, even for those studying it today. Many people still characterize traditional Indian life as 'primitive,' those emotionally sympathetic to it often extolling its supposed 'simplicity.' The reasons for thinking this way are obvious. To raise a crop of wheat a European farmer has to plow, sow, weed, irrigate, control pests, and harvest, all with specialized tools. The Indian...is seen gathering acorns from a oak tree...without apparent effort or advanced skill. Yet the use of acorn is anything but simple. It involves many hard-to-master and often elaborate technologies...In fact, if the entire process is measured carefully, it may take less work and certainly far less skill to create a loaf of wheat bread than a loaf of acorn bread."