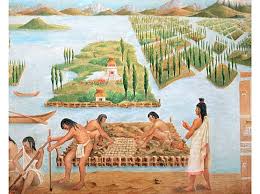 Chinampa is a method of ancient Mesoamerican agriculture which used small, rectangle-shaped areas of fertile arable land to grow crops on the shallow lake beds in the Valley of Mexico.

Sometimes referred to as "floating gardens," chinampas were artificial islands that were used by the ancient Aztec Indians. In Tenochtitlan, the chinampas ranged from 300 ft × 15 ft to 300 ft × 30 ft. They were created by staking out the shallow lake bed and then fencing in the rectangle with wattle. The fenced-off area was then layered with mud, lake sediment, and decaying vegetation, eventually bringing it above the level of the lake. Often trees were planted at the corners to secure the chinampa. Chinampas were separated by channels wide enough for a canoe to pass. These "islands" had very high crop yields with up to four crops a year. 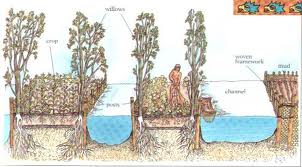